I really want to like the Grey Lodge. Super, super badly. I hate going downtown to drink and I am not particularly in love with the jackass hipsters in Fishtown either. I also do not mind the northeast too much, so it is a decent change of scenery sometimes. So, when I had heard of this place a long time ago, and realized it is next to my dentist (oddly enough), I was kind of excited.

This place is a bar on Frankford Ave in Mayfair that stocks, what can only be described as, a shit ton of beers. In the cooler they have your regular array of Boddington and other recognizable overseas beers (for those who pay attention to this sort of thing). But they have, on tap, a great rotating selection of beers that range from local PBC to California microbrews to everything in between. They also offer them in different sizes so you can just have a smaller glass of a beer and then have a few different ones as opposed to one giant beer. They have done their homework and it shows. They even have a nice selection on their second floor, which could have gotten the shaft and had the usual Coors, Bud, whatever sucks crap.

I had arranged with one of the managers to reserve some space upstairs for a reunion, and the guy I talked to (Patrick) was super awesome, incredibly accommodating and professional. When we all showed up, everything was exactly like he had promised, and everyone had a really good time.

The second time I was there, I strolled in around 6:30 on a saturday. It was dead, but there was a lineup at the bar watching the ballgame. When I popped up on the barstool, the bartender literally sneered at me from behind his bushy beard and took my order like I was asking him to pick fleas off my cat. Again, I was annoyed. When I paid the fellow and he got his tip, he seemed relieved, which I thought was bizarre.

Later on, I moved upstairs and there were 2 women behind the bar that were nice, quick with the beers and food orders and tidy with the bar. I ordered my food and it arrived quickly. 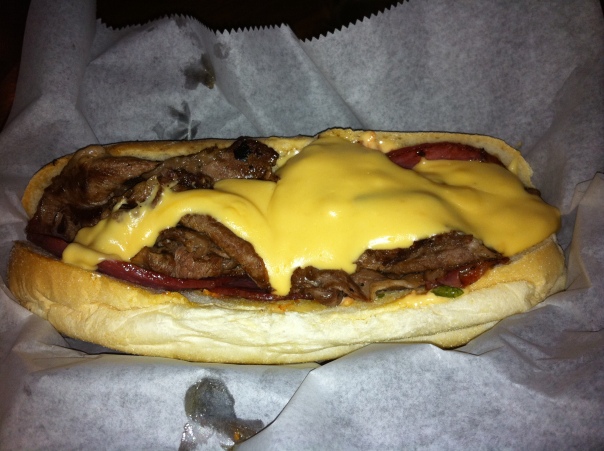 Anyway, it came in a basket and I was a little bit excited. I love cheese sauce (I have said many times, as my friends can tell ya). The meat was kind of chewy, the mayo was nonexistant and the salami felt like it was right out of the prep area and onto the sandwich with no grill action or anything (it was cooked, as you can see in the pic by the black marks on the edges but I think not long enough for the thickness of the meat). 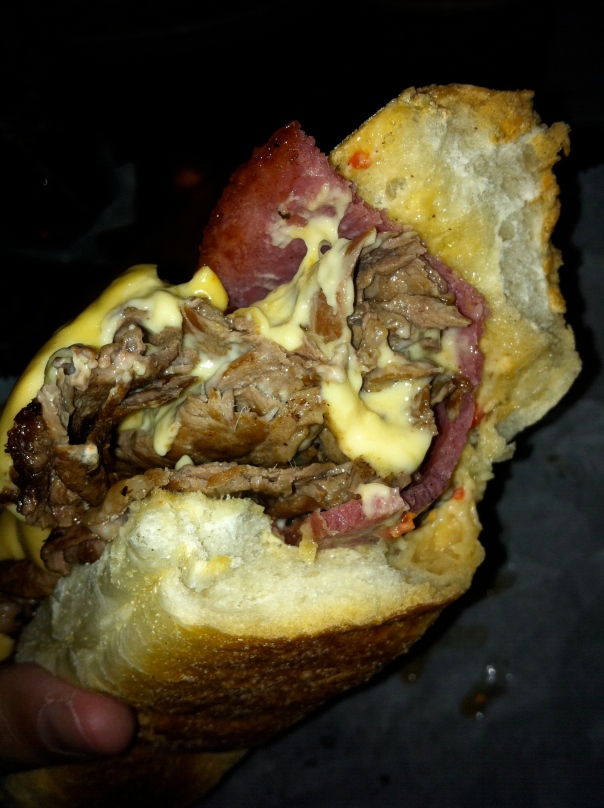 It was the most disappointing thing I have eaten all summer. I had such high hopes, that maybe I ruined it for myself, that no one could meet my expectations? I don’t know. Perhaps.

I want to love the Grey Lodge. I love the beers. I even like the decor (they had a cool Okocim metal sign upstairs!) and it is a very clean bar with ample room for darts. The bathrooms have glass collages in them! The management are very nice people! But the food…I just can’t get with it. I’ll be back Grey Lodge, maybe we can make it work then!