I spent a lot of time during my LA trip walking around, wether by myself or huffing, puffing and kind of jogging to keep up with my friend Sean who is 9 feet tall and totally fit. And of course, all the walking makes a person kinda hungry. I did not get to a few places I wanted to go, but I managed to go to a lot of them.

For my birthday I went to Disneyland. Overall, it was pretty kickass, except for the hour and a half wait to get on the Star Wars ride (of which, every 15 minutes I’d turn to Sean and say “this is gonna be awesome!”. He did not slap me, not once. Good man.) But I have to say, I ate 2 things when we were there: a churro, which was pretty great, and a piece of pizza and a soda which sucked beyond belief.

First off, the churro was warm and chewy and cinnamon and sugar deliciousness. There was a churro cart every 5 feet, which I found kind of weird. Hey Disney Corp: why not mix it up a bit more. Secondly, the pizza was 7 different kinds of awful. It was a puffy piece of wanna be pizza hut crap. I mean it was over the top bad. I ate it because it was either that or my arm by that point, but come on! I am going to Disneyworld in Novemeber, so I’ll see how the pizza holds up. But major, major disappointment!

Next up! I was sitting a the bar one nite, annoyed that the kitchen was closed and drinking my bazillionth whiskey. I needed to eat. Danny the bartender told me about Garage Pizza. It was open late! I was up off my barstool and over there in a flash. 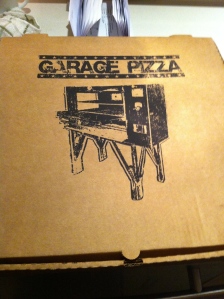 Garage PIzza has 2 locations, one in Silverlake and one in Downtown LA (DTLA). I visited the downtown location, on 7th between Spring and Main. Now, pizza in LA has a bad rap, and I understand why. You live in Philly or NYC, you are used to great pizza. The dough is awesome because of the water, and obviously the water out west if different and makes a different crust. So, I was sort of hesitant when the guys at the bar were talking it up.
I walked over to the pizza joint. It is pretty bare bones, with a lot of concrete and a few basic booths. A few Latino guys scurried around behind the counter making pizzas, throwing some dough around.
There was a menu with a bunch of very overpriced pizzas, and a few beers to select from, as well as some salads and sandwiches. I had no need for salads and sandwiches, but I was not too happy with the prices of the pies. Then I saw what made my stomach and heart dance a bit…on mondays, every pizza is $15. That is still kinda high, but the large pizza is a nice size, so what the hell, right?
I stepped up to order and could not stop laughing in my head because the 2 girls working the counter were dressed like they were in some sort of swanky club, barely dressed and all made up. Honey, you work at a pizza place. But, this was LA, so it’s probably par for the course. Anyway, I walked away with this pepperoni and red onion beauty! 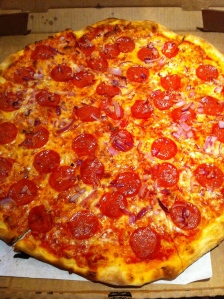 I staggered back to Sean’s place with this pizza. Nine homeless guys asked me for a slice. I think the door guy at the apartment building wanted a piece too. Mine. All mine.

This pizza almost blew me away. It had a nice thin crust, but with nice crunch, and the sauce wasn’t too sweet. The cheese was a little brown but not overdone and the onions caramelized nicely. This was a delicious, beautiful east coast pizza! I had another pizza later on in the week and it was just as good. If you live in LA, give this place a chance (go on mondays!)! Oh, and if you were wondering, it’s just as good cold the next day!