There are some people who need to go out and roam about drunkenly to have, what they consider, a successful New Year’s Eve. There are others who need to have an epic, crazy, shitshow of a party at home in order to be successful (including, but not limited to: a painted cat, someone’s underwear in the freezer and the sofa covered in spray cheese with the lawn covered in PBR cans). And then there are some people who are content to stay home and cuddle up with their significant other whilst drinking wines, eating cheese and watching some kind of PBS special about NYE celebrations around the world. Those people should be kicked (but that’s besides the point…).

I like a one stop house party. This year, I deviated and went to a gathering of cousins up in the Northeast and then to my friends Jackie & Tim’s annual bash afterwards. Both were a great time (Jackie & Tim’s parties always rock!), but I wanted to write a little bit about the food at my first stop.

My cousin-in-law Bob likes to cook, and he really outdid himself. First up? Prime Rib! 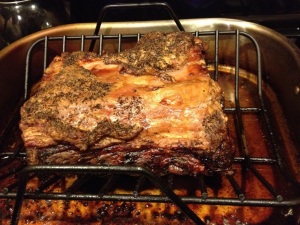 Prime Rib out of the oven!

Prime Rib, over the years, has gotten kind of a bad rap as a boring standby buffet food atany big hall occasion such as a wedding, anniversary party or anything someone’s parents have to pay for. If it is not seasoned and boring, it can be a let down. If it’s like this, right out of the oven, you just get EXCITED! (Ok, so maybe not that excited, that might just be me. I don’t get out a lot and have been single for awhile.)

Some people think Prime Rib is just Roast Beef. No! Roast Beef is made instead of Prime Rib and once you had really, really mouth watering Prime Rib, you will never blaspheme again against the lovely Prime Rib. (Bonus! Count how many times I used the term “Prime Rib” in this paragraph! Pat yourself on the back!)

A big mistake people make about meat is that they just take out of the oven, or off the grill, or even off the stovetop, and they don’t give the meat a chance to rest. Resting lets the meat relax and the juices can redistribute. If you ever cut into a steak and all the juices ran out and the meat ended up being kinda dry, the meat didn’t get a chance to rest. Feel free to smack the chef and grab some A1. This is what a Prime Rib, fully rested, looks like!

While the meat is resting, you can pop the roasting pan up on the stove and turn up a medium heat. Add some wine & stock and start scraping the bottom (the meat drippings!) of the pan to create a very cool Au Jus (or, thicken it up and make some gravy). Bob did just this, while I tried to drool on me and not the counter. I leaned in and snapped a shot!

The best part of the Au Jus, besides it being unbelievably delicious and cheaper then jars of salt filled gravy, is that when you have to clean that pan, anything that would have stuck to the bottom has dissolved into the liquid. So, really, you are just helping yourself.

Prime Rib all carved up!

Wondering what the final product looks like? How about this! Absolutely amazing! My hat is OFF to Bob! I know I ate a good 2 slabs of this buttery goodness, and even some of my other relatives, who aren’t into big pieces of meat, enjoyed it as well. 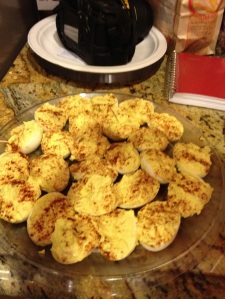 Not to be outdone, My cousin Michele made her Deviled Eggs. I don’t know what she puts in them, but she knows how to pack them. She doesn’t fill those eggs with a skimpy bit of filling, she fills and covers the whole egg with the filling! And they are fantastic!

Deviled Eggs are, again, another food that people kind of sigh when talked about. But find a good recipe and run with it! There is a reason why this appetizer (or, as we use it, side dish) has been around for so long…they ROCK! 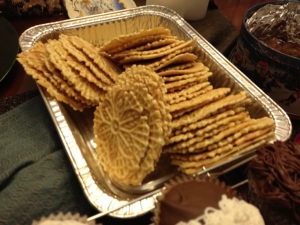 Dessert, you say? After taking a lap or two around the block, I cleared some room and took a look at the dessert table. Homemade Pizzelles (made by Bob yet again!), cupcakes and cookies.

I love holidays, but I think my pants are glad it’s over! That is, until all the Valentine’s Day candy goes on sale…