In the parking lot of the Showboat Casino, the AC Food and Wine Fest trucked on with “Redefine Cheesesteak”. And redefine they did.

Cheesesteaks as far as the eye can see!

Massive tents were set up in the parking lot and cheesesteaks were aplenty. Being from Philly, I am really picky as to how my steaks are, specifically that they resemble a cheesesteak or change the name. By definition, a cheesesteak is thinly sliced ribeye fried up with or without onions and served on a long roll with cheese of the american, provolone or whiz variety. Is it something I need to get over? Indeed. But I was able to bend enough to enjoy some of the offerings.

First up was Mike Scoats of The Grey Lodge and his merry band of steak slingers. The Grey Lodge is located on Frankford Ave in the Mayfair section of Philly and has a ridiculous amount of oddball beers and even hosts a Friday The Firkinteenth event on every Friday The Thirteenth that has just won Best Beer Event in Philly Magazine’s Best of Philly 2012! Mike has a great calendar full of fun things they do and an interesting menu full of outstandingly delicious food! He brought along his Lodge Steak for the masses to try: Rib-eye, Genoa salami, roasted pepper mayo & house cheese sauce. They cut their own steak, use quality imported salami and you can taste the handcraftedness. I guarantee you will not find a more unique steak in town. They could barely keep up with the demand of the people who came by and then returned, time and time again!

Next up is my friends at Tony Boloney’s! They won the Guy Fieri’s Cheesesteak Battle at  The AC Food & Wine Fest in 2010 with their ridiculous Cheesesteak Ole’ and haven’t looked back since! If they sent Californian Fieri back home with the picture of the Ole’ in his head as to what a cheesesteak should be, then everyone is a winner! Their Cheesesteak Ole’ is actually a little more like a cheesesteak hoagie, but it’s still fantastic. It involves 10 spiced sirloin steak, pepperjack cheese & chipotle house sauce on top of lettuce and tomato. It all melds together to form what I like to call the Cheesesteak of Greatness. In all honesty, Tony Boloney’s, at 300 Oriental Ave and a stone’s throw fromt he Revel, is one solid reason to drive to AC. Keep an eye out for more of thier menu on this blog. 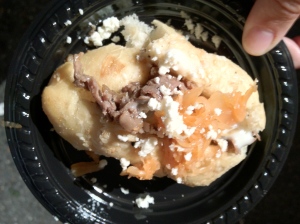 Community Foodbank Of NJ “Cheesesteak with a Twist”

The Community Food Bank Of New Jersey had a stand and they weren’t messing around! A soft, buttery roll center stuffed with steak and perfectly cooked onions with a nice crumble of cheese of top made it one of my favorite steaks of the fest. I also love what they stand for: helping anyone who needs a hand in the area. They run a food service training academy, they run a whole kids division with a kids cafe (to feed kids who otherwise wouldn’t have anything to eat), a kids closet (clothing and coats), a backpack program and even a tools for schools program. They also distribute food, do catering and lots of other stuff. If you want to donate some money, sending them some cash would be a great move, or buy their new book “Cooking For Change: Tales from a Food Service Training Academy“. All proceeds benefit the Community Foodbank Of New Jersey! This is truly an organization that knows how to help people and help them move forward! 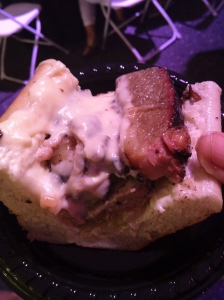 Percy Street BBQ come to the fight with their unreal take on the cheesesteak, which is not a cheesesteak at all. Frankly, I could care less because it blew my mind. Bercy Street BBQ sits on South Street in Philly between 9th and 10th streets, cranking out BBQ that, until recently, was only really available closer to the South. They understand what the ring is and they are dead serious about this fantastic meat.

The meat was carved in front of you and packed with delicious strips of it, and smothered with a creamy cheese sauce. Easily my favorite non-cheesesteak cheesesteak. Well, it’s actually a tie with.. 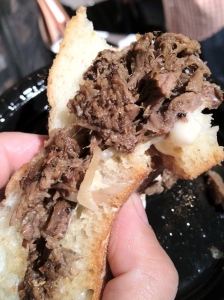 This sandwich was unlike everything else at the fest! Definitely not a cheesesteak but definitely on my meat list! It was like juicy shredded potroast on a roll and I could not get enough of it. Unfortunately, I lost their business card and only remember that they were next to Tony Boloney.

I have to also mention that it was about 900 degrees that night. Eating cheesesteaks in that kind of heat does a number on your body. What helped was that there was plenty of beer, provided by Amstel Light, and plenty of booze, provided by Jameson, Jim Beam and Red Stag. Red Stag is a flavored whiskey that Beam is putting out. At first I found it to be a party foul of massive degrees to do such a thing, but after tasting it (the Black Cherry flavor), it’s actually kind of interesting.

Andrew Zimmern, of the Travel Channel’s Bizarre Foods, was the host of this shindig, and he is really the nicest guy ever. After talking onstage for a little bit, he hung out at his booth, making sandwiches for people, answering questions, taking pictures and overall being a very personable and cool dude.

It was super crazy hot and humid, like I said above and he very easily could have disappeared into his tent/trailer/hotelroom and retired for the night. He didn’t and that was very cool of him.

His offering at his table was a cheesesteak made, of course, of tongue. I found that funny, because, well, us Philadelphians are known for having big mouths. As you can see, it looks like a typical cheesesteak, with nice carmelized onions and green pepper strips. I have not had tongue before but I figured if Andrew can stand in that heat and cook it, I can stand there and chew it. It was a little chewy but the flavors were nice and subtle. The tongue itself has a really weird aftertaste that I didn’t particularly like, but I applaud the effort!

Here are some more cheesesteaks that were pretty awesome!

This steak from Carmine’s, the “Italian Cheesesteak” was pretty great, the meat was very juicy and the roll was deliciously chewy after it soaked up all the juices. two thumbs up!

Union Trust Steakhouse, at 7th and Chestnut in Center City Philly, was there too with thier very traditional but also awesome cheesesteak.

Square 1682 is a fancy pants restaurant in the also fancy Rittenhouse Square area of Center City. Thier little cheesesteak on a square bun (get it?) was amazing. It was like the big pot roast sandwich above but on a tiny little bun and covered with a delicious cheese sauce that was thick enough to stay on the meat but thin enough to roll around a little bit. 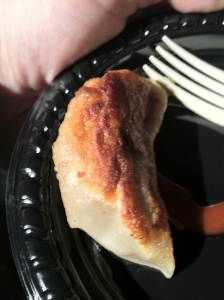 Lastly, but not leastly, was the Sammy D’s cheesesteak dumpling. As someone who used to make a cheesesteak pierogies, I have to say that these guys got it right. The meat was wrapped tight, with the cheese mixed in with the right proportions (too much and it’s cheese with a hint of meat, too little and it’s drier then a desert). Huzzah to Sammy D!

The event in general was pretty awesome: not too crowded but the chefs were all putting out top notch food for the crowds. My hat is off to Showboat and the organizers for putting together a fun event that clogged my arteries!

That brings the first half of Day 2 to rest. Stay tuned for the second half soon!