Tony’s For Truth In Tomato Pie 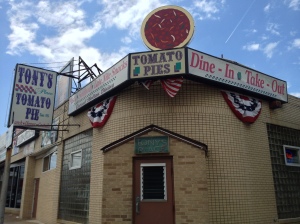 A few weeks ago, Joe Moore (of the sketch team Dog Mountain), his wife Emily (of the Camden County Library System), Brian Kelly (of the sketch group Secret Pants) and I met at Tony’s, in Mayfair, to eat tons of their awesome tomato pie as well as their regular pie. If you aren’t from Philly, and more specifically, from somewhere around the northeast, you might not know Tony’s. It’s actually a bar & restaurant (with great red vinyl booths that you can’t even find anymore), that sits on a weird angle of Frankford Ave, across from the old Devon movie theatre (I saw “Who Framed Roger Rabbit?” there for a buck when I was kid.). 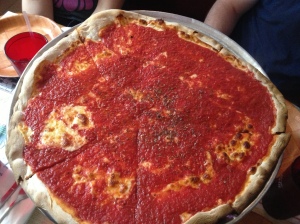 Since there were 4 of us, we ordered a bunch of pies. The first being the Famous Tomato Pie! A tomato pie had the sauce on top (altho some tomato pies have no cheese at all). A lot of people compare Tony’s to Tacconelli’s, for they both have the thin crust people love so much. I love it too, and Tony’s never disappoints. 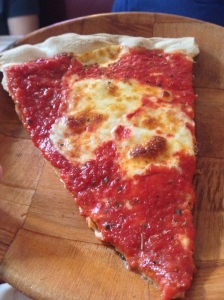 A Slice of Tomato Pie

It’s not skimpy on the sauce, which is sweet but not as sweet as Tac’s, which I am a-ok with. They also use a square cheese which is delicious and doesn’t take away from the fact that it’s a tomato pie. What I am saying is that the cheese is like the supporting player: it makes everything else look good without taking much glory for itself.

The crust is thin but, well, there is a difference between thin and “crumbles like a taco shell once you take a bite out of it” thin. This crust walks that line confidently. 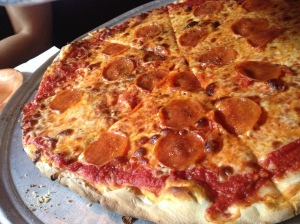 We also ordered a two other pies for our little booth!

Next up is the Pepperoni Pie! It was a pretty awesome pie. They were not skimpy with the pepperoni, and while it wasn’t thick slice, imported, artisinal pepperoni that foodie people whine about, it still was delicious and plentiful. There were no breaks in the cheese, it was a solid covering, with just a little bit of sauce peeping out at the crust. Frankly, that’s the way I like it. I like cheese and I like a lot of it. This pie fit the bill!

Next up is the green pepper and onion pie. This is one of my favorite combos. The onions weren’t burned but almost roasted and the green peppers were soft and absorbed some of the grease from the cheese so that they were almost buttery.

Again, the cheese was a solid sheet over the pie, but this time there was a little more sauce peeking out of the top to announce it’s presence.

The pizzas at Tony’s are flat out amazing and do not get the props they deserve in this town. It’s a quiet jewel among the throngs of pizza places that clog the streets of Philly. Do yourself a favor and drive on down to Tony’s and treat yourself to some amazing pies (and they also have a full menu of other things as well as a vast assortment of beers!).

Joe Moore has written up some of his thoughts on Tony’s as well, as he is our reigning Pizza Expert here at DidjaEat:

Brian, Joe, Emily and Me!

My favorite pizza in the country is technically a “tomato pie” and depending on who you talk to, it’s a night and day difference. Cheese on the bottom, sauce on top. This really forces the tomato sauce into the spotlight, and you pay more attention to what it’s doing with the pizza when you’re looking at it right in the face like that. Fortunately, Tony’s sauce is great. I think I preferred their tomato pie over the regular cheese-on-top slice.

This was the first place I saw where they put sliced squares of mozzarella cheese, and I’ve actually seen it a few other times since. Pretty odd, and it definitely gives the pizza a different dynamic as you’re almost guaranteed an even amount in every bite… it might even make it a little disappointing when you get a bite with out some towards the crust.
The waitress we had was really nice and patient while we were trying to figure out our order (three pies, one tomato, two regular with toppings). They also have some insane specials there on a week night (was it Monday or Wednesday? I forget!) but even without a deep discount, Tony’s is worth the trip.