Back in April I went to Flight Market (a precursor to the Food Trust’s Night Market, where there are about 60 food trucks bringing you happiness) with my friend Michael (and his son Efrem) to see what we could eat. We had Waffle Fries with sausage gravy and popcorn chicken, a pork loin sandwich that Michael still dreams about, donuts with cereal on them, brown butter brawler ice cream from Little baby’s Ice Cream and my all time favorite from Foolish Waffles: whipped cream and blueberry compote on a warm fresh homemade waffle!!!!

Every so often, something that’s been around forever becomes hot. The past year or so, Greek Yogurt (made form real Greeks!) has been super hot. Every major dairy producer has tried to get in on the act and I’ve seen it all: Greek Yogurt with fruit, with spices and even with chocolate (gross). The thing is, it’s a tart kind of taste and either you like it or you don’t. Masking it with flavors won’t stop that. I like the plain kind with the zero fat. It seems to taste better to me, more of a coherent flavor. But that’s just me. 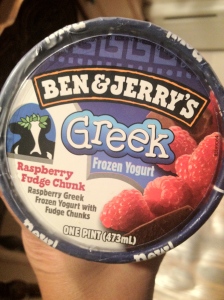 Anyway, since everyone is jumping on the Greek Yogurt fad, leave it to the brainiacs at the Ben and Jerry’s division of Unilever to come up with a Frozen Greek Yogurt! I saw it in the store a little while ago and was intrigued. Would it be that sharp, tart taste of the yogurt in frozen form? The answer is yes, but also no.

Let’s start with the Raspberry flavor. It’s pretty subtle, almost hiding in the wings, waiting to jump out but always chickens out. It’s like half there, but still there. I thought, as I was eating, that I wouldn’t like that after while but it mingles nicely with the other flavor: the fudge chunks.

The fudge, which is the same as the fudge in the Phish Food ice cream and the same shape as the chocolate in Cherry Garcia, is plentiful. When I say plentiful, I mean they jam a lot of those chocolate chunks in there. I’m not complaining, don’t get me wrong, I’m just reporting: lot’s of fudge chunks. Or, actually, more like fudge slats, about the size of After 8 mints (remember those?). 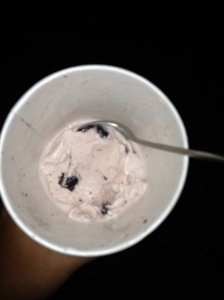 The actual Frozen Yogurt itself is interesting. It has a tiny bit of that tart zing, but not a whole lot of it. It tastes better then the usual flatness of frozen yogurt, but without the punch you in the tastebuds of the Greek Yogurt.

It’s a genuinely interesting flavor and pretty unique. I imagine some other ice cream companies will have this out sometime soon as well but for now, B&J’s has the corner on it. I normally don’t buy ice cream and/or frozen yogurt, and if I do, I normally don’t buy Ben and Jerry’s because it is a little pricey and I am persistently broke. But for this, I’d scrape up some change. The blueberry crumble one looks interesting as well. I better go hit the treadmill before I hit the grocery store!

For those of you who aren’t frequent readers, we started a new thing here called “The Guest Eater” column. Friends of the blog pop in and share some great food stuff they have come across with all of you! This week, Shannon Brown, from the sketch group ManiPedi writes in about their trip to Austin, Texas (where they were performers in the “Ladies Are Funny” (or LAFF) Festival).

While preparing for Austin, I found myself very excited for a few things: performing, seeing shows, The Bat Bridge and eating…well, mostly eating. We had heard a lot about all of the great food we would eat, we watched shows about food in Austin, and picked up maps of food truck locations. We were an unstoppable group, with cast iron bottomless pits for stomachs. 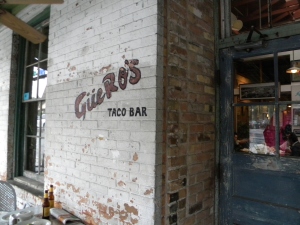 Around the fourth minute into our stay in Austin we were on the hunt for food. Due to seeing shows and eating at some okay places, I found my favorite dishes the second day we were there. During our visit to the Capitol Building, the wonderful people that ran the LAFF suggested we go to Guero’s. I ordered a chicken especial, breakfast taco (with eggs, cheese, and if I remember correctly, bacon). 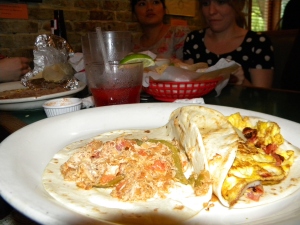 I can’t describe any of the flavors of the chicken taco, because I more or less inhaled it. It was so good, I couldn’t stop eating until I reached my own human fingers. I loved it. I didn’t dig the breakfast taco as much( I also don’t really like breakfast pizza) but it was still pretty good. I added some of their mild salsa—from their salsa bar(just as you would imagine, an array of salsas) and that made it pretty great. I also drank a strawberry margarita which was also wonderful. 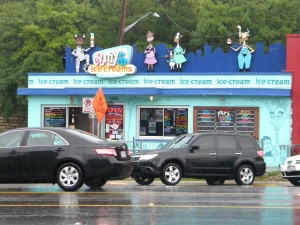 A photo of Amy’s, taken from across the street, under a tin roof.

That same day, I spotted Amy’s, an ice cream shop I had seen on a tv show about five
strangers who travelled to Austin together. They made a pretty big deal about the place, so I wanted to check it out.

It had been a dreary, rainy day. While everyone else went to get coffee, I convinced Briana to walk over to the outdoor establishment (on the show the cast went inside. When we went, it was only a walk up window. I felt duped.) to wait in the rain as the patrons ahead of us sampled various flavors. 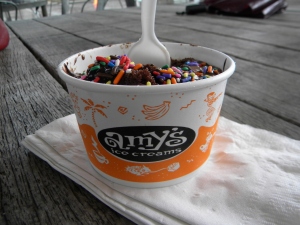 When it was our turn, I ordered an emo kid—dark chocolate ice cream, homemade chocolate cake pieces and homemade hot fudge. I opted for rainbow jimmies, which was met with a “hey, I guess this is a cheer up emo kid now…” I didn’t find this as amusing as the youth behind the counter did. However, the slightly tweaked specialty was goddamn amazing. It was everything I could have ever wanted. The suckers who opted for coffee each had a taste and loved it as well. 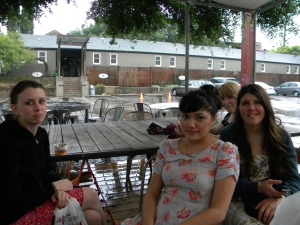 Apparently Austin was in the middle of a drought…until the weekend we were there.

I should also mention that the Embassy Suites we stayed at had a fabulous free breakfast buffet. We hung out there as long as possible each morning stuffing our faces with all of the delicious hotel food they offered. They also had a complimentary happy hour every night. We only went to that once. In spite of all of the rain, that was my favorite day in Austin.

Thanks to Shannon & to the gals in ManiPedi for writing up thoughts on Austin food on the trip! Check out their new video “The Taco Bell Jar”. Funny stuff!