I have to admit, I do not enjoy writing about food I don’t like. Negativity is not something I enjoy spewing all over the internet like a heavy meal after a run at a bottle of Jameson. I genuinely like food and sharing it with all 4 of you who read this blog. But when I go somewhere with a reasonable expectation of awesome, and it only half registers a pulse, I gotta talk about it.

When I was in college up in North Central Jersey, I had a lot of people in my dorm who were very anti-Philly in terms of sandwiches (and anti-Philly in general, which I found hilarious considering that they had never been there and they were all from podunk tiny towns and always referred to NYC as “The City”, like there weren’t any others in the world) and very pro-North Jersey and I heard a lot about this White House place. I even remember Bill Cosby name dropping it a few times on the Cosby Show when I was a kid (side note: I cannot remember my phone number half the time but I can remember a food reference from 25 years ago. Go figure.)

I have a thing for old places. I like some history, some backstory. Smiling old people in pictures on the walls make me order more food. I also like vinyl booths, pop up napkin dispensers and cool signs. I’m a sucker for a place with soul. So, in that part, The White House did not disappoint. It had an old school sign up on the roof and it is pretty no frills, which I can appreciate. 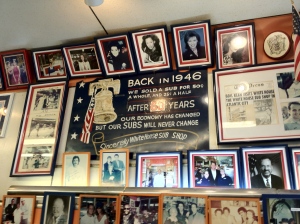 When you see a sign like this, proudly pronouncing that they have been open for 60 years, it’s a cool thing. Nothing these days lasts very long. You think Bobby Flay’s Burger Joints will be around for 60 years? Much like any famous deli/sandwich/steak shop, this place is covered with famous people who have swung by to stuff their face with sandwichy delights. I’d imagine, since this place is literally up the street from the Taj Mahal Casino, it wasn’t too hard to get people to come and eat, but whatever.

But enough about the decor. Let’s get down to the brass tacks. The food. (also, I will be referring to all of the white house offerings as “sandwiches”, not “subs”.)

This place does sandwiches. Not “hoagies” but “subs”. A whole is pretty big, most people get a half. The roll is pretty awesome. They get them from a place up the street, The Formica Brothers Italian Bakery. Nice and fresh. It’s the kind of roll called an “Atlantic City Roll”, just call it a great roll. It’s crusty and chewy but not too much of either of those things. It’s just right and saves both of these things I ordered from me having a fit.

The Ham, Cappicola, Genoa Salami & Provolone Cheese was pretty good. The meat was not skimpy, but it also wasn’t really piled on. I did enjoy the fact they they didn’t cheap out on the provolone, sometimes when you get a sandwich the cheese is sort of an afterthought. Really, the only issue I had was my own fault, I forgot to ask for mayo and I got oil. There is a line of thought that italian hoagies always get oil but I am a mayo freak so I like it on everything. In fact, I usually order extra because rolls tend to soak it up and then the sandwich gets dry. That’s not acceptable to me. (oh, I also ordered a side of sweet peppers as well. They give you a nice sized container of them, it made me happy.)

The thing about these sandwiches, and maybe it’s just me, or that’s the way a sub is supposed to be, but these sandwiches are flat. Any good hoagie I have ever seen, and a sub is a hoagie, have been round. I just found that weird. What do you guys think?

Let’s talk a little bit about the Chicken Parm Sub. I ate this thing like 3 weeks ago but I had to wait to actually sit down and write about it because of how angry it made me. Yeah. Angry. A sandwich made me angry (seriously people, I need a life). You might think I am being ridiculous but when you see this thing, you will understand.

I have eaten hundreds of chicken parm sandwiches over the years. It’s an easy idea: breaded pieces of chicken are put on a roll. You cover in sauce and cheese. Delicious and done. It is almost impossible to screw up. Or so I thought.

Let’s talk about the size of this thing. As in, the lack of filling. If you click on the picture, it actually kind of looks like stacked up chicken cheesesteak meat. That is NOT acceptable.

I started eating this thing, half in shock and half wondering what the hell was going on. Then I took a bite of the dry sandwich. Wait, it’s supposed to be saucy. This thing has about 2 tablespoons of sauce on it.  And the sauce was flat and nasty.

Like cheese? Cheese takes a vacation on this thing. I do NOT UNDERSTAND what they are doing here. Was this thing made by an intern? Or half the sandwich fell out on the way to my table? Maybe aliens escaped with half the chicken? Maybe they ran out of breaded chicken and had to fill the sandwich with this crap?

I ate half of it and took the other half home. Sometimes, a sandwich tastes better the next day, or even just a hour or two or three later.

I took this thing home and it was even shittier later on that nite. And I was drunk! Everything tastes better when you are drunk!

This whole thing baffles me. I was told by a local that the place isn’t the same as it used to be. I don’t understand how that is possible. A chicken parm sandwich is a simple item of food. Chicken is fairly cheap to buy and you already got the rolls. The sauce can be made in 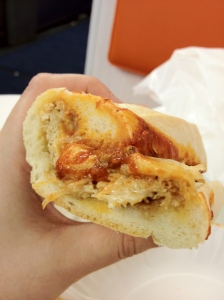 huge batches and frozen so it’s not a big deal. You can buy bags of shredded cheese at places like Jetro and Sysco for a song. Whatever the hell they are doing with this sandwich, in the name of all things holy and sandwich related, should be STOPPED.

I am sure someone is going to slam me for writing this post. Trust me, there is no one out there who would love to love a new sandwich shop like me. As someone who has worked in food, loves to eat and loves when people have a small business that is thriving, I was hoping for the best.

So, here are some things I did like: they have nice napkin dispensers that pop up the napkins and it makes it easy to grab when covered with various sandwich accoutrements. The waitress was super nice. They give you a choice between bottled water or water from the soda machine (aka tap). If you are a single person, they have a small booth that is good for one or two people if you don’t want to eat at the counter (the regular sized booths are saved for 3 or more people). Like I said above, I enjoyed the pictures on the wall, especially the Tug McGraw (my favorite Phillie) at the grill picture. I also enjoyed the size of the cups they put the sweet peppers in, it was just enough.

Here was the brightest spot in my visit to The White House. A taste of Philly.

So, if you are headed down to Atlantic City, if I were you, I would avoid this tourist trap and go to Tony Boloney’s (300 Oriental Ave) instead. While I had one ok sandwich, that chicken parm was so horrendously bad, I wouldn’t risk eating anything else there, except for, of course, Tastykakes!