I don’t cook maybe as much as I should but sometimes I get the itch and try something new. I was watching Anne Burrell’s show “Secrets Of A Restaurant Chef” and she had been talking about stuffing chicken breasts. This got me thinking and I decided to try it.

Stuffing the chicken wasn’t the kind where you butterfly the breasts and then wrap them around actual stuffing. No, this is more like how you get filling into a cupcake. But first, let’s look at the making of the filling. 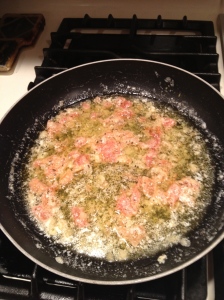 The beginnings of chicken filling

I started with a stick of butter, melted slowly. I then minced 2 cloves of garlic and threw them in. With garlic you gotta make sure it doesn’t burn or you have to start again and, frankly, I don’t have the patience for that. Anyway, the garlic slowly cooked into the butter and I shook a bunch of parmesan cheese in there, along with a little salt, pepper and italian seasoning. On the side I had a brick of cream cheese that was softened and cubed up sitting in a little bowl.

Then I threw in a tomato that I had taken the skin off of and let that swim around in the butter for a while. All this time it was on a low heat so everyone could have fun in the pan.

When everything was nice and together, I put

The shrimp for the filling

the mix into the bowl, mixed it up and set it aside. I knew I had one more thing to do! The mix felt like it was missing something, so I threw some shrimp into the pan with the remnants of the previous tenant and some more butter, garlic and parmesan cheese! I kept it at a low heat because these were precooked (It was what I had in the freezer. I know fresh is better but you have to roll with what you have lying around) and I kept on flipping them over in the butter & garlic mix.

In the meantime I kept mixing the cream cheese mixture. I wanted to make sure that everything was evenly distributed and there was no lumps in the mix.

When the shrimp were done, I de-tailed, chopped finely and tossed into the mix. Again, lots of mixing. Once it cooled, I popped it into the fridge for a bit while I started working on the other pieces of this meal.

The chicken breasts were a nice size. Basically all I had to do was take a knife and make a slit on the fat part of the breast end and wiggle the knife around to make a pocket. I did that to 4 breasts and set them aside.

After that, I took a Ziploc bag and filled the bag with the filling, favoring one end of the bag. I twisted the bag closed and pushed the filling into the corner and cut off the tip of the bag (ouch! haha).

The cut off end of the bag fit perfectly into the chicken and I filled each one with the filling. It took a few minutes to get the hang of it but it worked great! I even added more filling to 2 of the chicken breasts because I had a bunch left over.

After filling the chicken, I dipped them in flour, egg and then Panko breadcrumbs and

then they went right into the cast iron pan! When you do bread and fry things like chicken breasts, try doing it that way (Panko is a lighter Japanese breadcrumb that is delicious but it works even with regular breadcrumbs). The flour and egg mix combine to keep the meat moist and not fall right off the meat when you try and fry it. And of course, the egg helps the breadcrumb stay on as well. It’s good stuff.

I also didn’t have the heat turned super way up because I didn’t want to burn the breadcrumb and have raw chicken. So I had turned it up a lot before I put them in and then lowered it after because cast iron does hang onto heat. With something like this, it’s better to take your time then to hurry it up and burn the crap out of it. I had put too much time into prepping to screw it up at that point.

With all this protein going on, you must have some kind of vegetable. If, for the very least, color, haha. My mom really likes Brussel sprouts, so I decided to pan roast some with olive oil, salt and garlic. I would rather eat the parts of my car engine then eat Brussel sprouts but she loves them and they do look pretty in our little mini cast iron pan. I made some peas for myself, I do love peas!

At this point everything was cooking at a nice clip and I had time to do something important: clean up. There are fewer things I cannot stand more than having to clean up a mountain of dishes after eating a good meal. It makes me crazy. Dishwasher or no dishwasher, cleaning up as you go is something I have learned over the years and I stick with it. Especially working with raw chicken, which, I am sure you know, can make you best fiends with the bathroom if handled incorrectly. I follow this rule: you touch the chicken, you wash your hands each and every time. Some people do not like to wash their hands 6 times during a cooking session but I say that is better than getting sick, or getting whoever you are cooking for sick. Just do it. Good food safety isn’t just for restaurants, it’s for everyone!

Sooo…once the chicken was done (I even used a thermometer to check!), I plated it up for my mom and I (my stepdad got corn and buttered noodles and I forgot to take a pic). I didn’t make the breading super crispy because I thought a nice golden brown would be better, and it was! Check it out!

The final dish with the sprouts 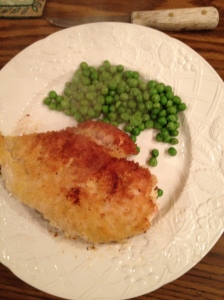 The final dish with peas

The reaction was pretty positive! In hindsight I think I would chill the stuffing mix more before using it, because it really melted down, altho you could really get a nice sense of the garlic, shrimp and butter. But overall I was pretty happy with the results.

What do you guys think? Let me know!