← Tony Boloney Nails It
Burgers and Hoagies and Scallops, Oh My! →

I grew up at, and still live in, a place with awesome pizza. I can really say I have only had pizza I wouldn’t eat a handful of times and most of the time it comes from a freezer (and being honest here, I’d still eat it. Starving kids and all….). Up until I was in high school, I only had pizza from local pizza places, with the occasional trip to Pizza Hut on a Friday night as a treat.

I always liked Pizza Hut, but only ate it once in a while (and let’s face it, that’s some heavy, greasy pizza. I don’t know about you, but I always have to book some home time after that until my body returns to normal afterwards.) and I was always allowed to load up on the salad bar first, so I think my Mom thought I was even-steven with my nutrients. Pizza Hut was the only chain pizza place in Philly at that point. We would see ads for Little Caesars with the little toga guy (who looked suspiciously like the little guy in the Pink Panther cartoons), but no one I knew ever ate there or knew where one was (until about 10 years ago and my friend Pat told me there was one by his house in Havertown when he was a kid in the 90’s).

So, in the past 15 years or so, Dominos, Papa John’s and Little Caesars have infiltrated the Philly area. I don’t like eating at places like that because I’d rather support local businesses and keep money in my neighborhood. I have had Papa John’s and Domino’s and I’d rather eat my sneakers then eat that inedible crap again. I don’t care how much they say they changed, the pizza is always all crust, and puffy, crappy crust at that. But, as the glutton I am, I was intrigued by the Little Caesars “$5 Hot and Ready Pizza”. I mean, how good could a $5 pizza be? One night I was talking about it at an open mic and my friend James Hesky (of The Monthly Hour with James Hesky at the Philly Improv Theatre) told me it was pretty good, so that intrigued me. I had to have it.

One Sunday, I was hungry. I also wanted to watch football. And all I had was $5, so I ended up at Little Caesars. Contrary to what the ads might have you think, they offer a lot of other sorts of pizza, I think they offer the $5 one to lure you in and then try the up sell. It wasn’t a strong-arm up sell (Crazy Bread? Soda? Wings? A Square Pizza?), so it didn’t bother me.

I took my pizza and headed for the hills…

I got home and settled myself in for some pizza. This thing wasn’t too large (it’s 14 inches), you could maybe feed 2 hungry people with it, but I wouldn’t go to 3 unless you like fist fighting (maybe your friends are different, but I wouldn’t test it). I ate half of it and then the other half after the game. The shame was free with purchase.

The grease was about average for a pizza (it wasn’t sliding around or anything) and yes, it was hot. Not super crazy burn-your-mouth hot, but ready to put on plate and enjoyed (Or eat out of the box. Not that I do that…). One thing that I liked was the pepperoni were full pieces, not cut up or mutilated, but actual, real pepperoni slices, and they weren’t skimpy, as you can see from the picture over yonder.

In other pizza chains, the crust is a greasy, chewy, kind of gross piece of semicooked “dough”. Then, the sauce is kind of slapped on and the cheese, well, I’m getting stomach cramps just thinking about it. On this thing, the cheese comes right up to the edge and the cheese, while not the finest cheese you can buy, does the job. The sauce is slightly sweet but pretty evenly seasoned. It’s designed to not offend and I appreciate that. 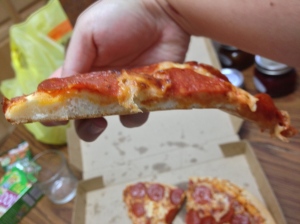 Now let’s talk about the crust. Instead of a giant, shitty, mouthful of grease and air, this is a flatter crust that still is a little greasy, but really just about enough to give it flavor without dripping down your arm and staining that sweet new Star Wars shirt you got for your birthday. I hate when that happens.  I mean, when it happens to others, not me or my new R2D2 shirt.

So what’s the final verdict on this thing? I don’t want you to come away from this article and think that  I am in love with this pizza and it’s the best thing since…sliced pizza. That is far from the truth. This is no Taconelli’s. This is no *insert your favorite pizza place*. This is the best pizza you can get for $5 when you look at the 3 chains (Pizza Hut is its own category). You can eat it, hate yourself, take a nap and wake up for $5. The sauce is decent, the cheese is decent, the pepperoni is decent and the crust is decent. It is a decent $5 pizza and if you find yourself hungry with limited funds, go for it. And have a happy nap.

← Tony Boloney Nails It
Burgers and Hoagies and Scallops, Oh My! →