Living in a town like Philly, which is like an hour and a half from the Ocean, you’d think we would eat more lobster. I mean, we eat a lot of seafood in this town, but not really much lobster. Every person I know (sorry, not my kosher jews) has a favorite place for crabs but I never hear anyone say “that lobster place is my jawn”. I would think that it’s probably because of how expensive it is. I mean, in Maine they eat everything with a side of lobster claw (and knuckle) meat. I hear they have so much of it that they freeze it and use it as hockey pucks. This fever I have makes me think weird things, so I could be wrong…but I doubt it.

Anywho, next to the awesome Underdogs, is a brand new place. A new outpost of a small chain called Luke’s Lobster. What do they sell? Lobster rolls! The quick story is that Luke is from Maine and went to school in that other little town you may of heard of, New York City. He noticed he couldn’t get a decent lobster roll to save his life (kind of how I feel looking for a cheesesteak anywhere outside of Philly). On a side note, how hilarious is that, considering Manhattan, where he was, is an island. So he decided to ship lobster meat from Maine down to NYC and show those idiot city folk how it’s done. And you know what? HE DID.

Let me just say first off that this place is not cheap. You aren’t bringing the kids here for lunch (unless you live in the rich people enclave of Rittenhouse Square, where this place is. Those people would consider it slumming to just pay 23 bucks for anything. They use $50 bills to clean thier cat’s litter boxes. If they weren’t already paying someone to do it for them, that is. You get my point.). But if you want to treat yourself, normal person, rock on!

As you can see, like I said, it’s not cheap. I got a lobster roll and a shrimp roll and it cost me $23. I am interested in the clam chowder and the crab roll, but hey, I had to make a car insurance payment that month. Lay off, moneybags.

The staff was super nice and while they did the usual spiel about trying upsell your meal, they weren’t dicks about it, so that was nice. And they have a little card that if you get it stamped around 8 times, you get a free lobster roll. So at least they are rewarding you for coming in. They also have a really cool collection of sodas form Maine to buy. I like supporting small businesses and I thought that was a nice touch. 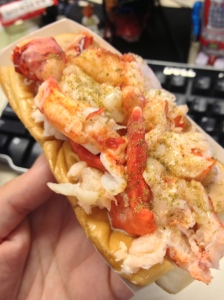 The first thing I ate was the lobster roll. They keep it simple. The lobster isn’t hiding in mayo (You know my feelings for mayo, but I didn’t miss it here. Don’t tell mayo, I don’t want him to get mad at me.). The roll is a classic lobster roll, which is a hot dog bun split on the side instead of the top and then lightly grilled in butter (yum!). They just put a dab of mayo on the roll, load up the chilled claw and knuckle meat and hit it with some doctored old bay and some kind of lemon. That’s it. And it was AWESOME.

Eating this thing made me start wondering if maybe we are on the wrong track with things. Maybe the simpler things are better. Maybe we have taken things too far, that we need to scale back. Maybe 900 feet of snow in the winter and deadly seasonal depression is ok because you get to eat lobster rolls like that. I don’t know. I don’t know anything anymore! Rosebud! Rooosebuuud!

What I DO know is that a buttery bun with claw and knuckle meat that is as big as a golf ball will almost make you weep in your little cubicle that you are eating in as to avoid some jerkass coworkers who like to shit all over your dreams. And it’s salty tears of joy. The salt harkoning back to the sea, where the lobster comes from. It’s all circular, people! Circular! Or is that cyclical? Oh, I don’t know. What I’m saying is that, holy crap, that is worth every penny of the $15 bucks it cost.

Since I am a world class glutton (who needs to see 50, really?), I also jumped in and got myself a shrimp roll. No, not a $1 menu item from the corner chinese place. It’s the same roll, buttered and lightly fried and mayo’d, then jammed with chilled shrimp, that old bay secret seasoning mix and GO!

It was good, I’m not gonna lie. Was it as good as it’s big brother? No, sadly no. But this is like the Williams sisters. They are both good! Just one is more muscular, I mean, better, then the other.

So, summing it all up, YES! Go! Now! GO NOW! (check the hours first, duh) But go get the lobster roll. Or get the Taste of Maine, where you get a 1/2 of all three plus chips and a delightful soda for $20. It’s a pretty good deal. I will be back, Luke’s Lobster! Oh yes! I cannot wait, and I will be coming with small bills! *insert evil laugh here*

I wish Pinchy were here to see this!